KK multicopter – crash but no burn… 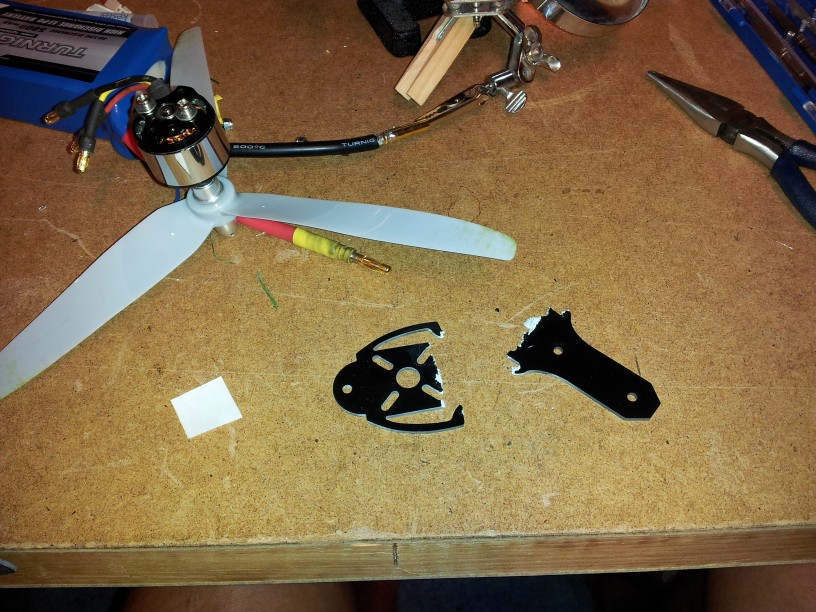 After my batteries arrived, I was very much prepared to get started with the quad copter. It was then that I realized that my cats had been chewing on the copters props! Grrrr…. So I ordered up a bunch of replacement props, which will be great to have on hand. I was soooo looking forward to flying the copter.

Finally once all the parts arrived, I was able to get the copter outside for a first run at flying. First flight of the multicopter didn’t go as well as expected. The copter kept wanting to flip over. At first I thought I had the wrong propellers installed but after a bit of troubleshooting I realized that it was motors 1 and 3 that had been plugged into the wrong spots. After fixing that everything acted the way it was supposed to and the copter left the ground.

The back yard doesn’t offer a lot of space for flying so Josh and I took the copter to a local soccer field. The next flight went quite well with the copter lifting off, flying around a bit and then landing (hard). We moved the quad to the center of the field for the next flight as it seemed to have a tendency to float right.

This time when the copter lifted off, it got about 20′ off the ground and then one of the props literally flew off!! My heart sank as I watched the copter do what it could to recover from this mishap.

The crash bent some of the connectors on the top of the board, so I have now installed a small plastic container to shield that part of the quad during future crashes. One of the motor braces also snapped, so I took a look around the garage for a suitable piece of wood/plastic to repair it. I managed to find some paneling that was quite a bit thicker but was quite light. (I have since picked up some thin plexi-glass that I will try for the next repair)