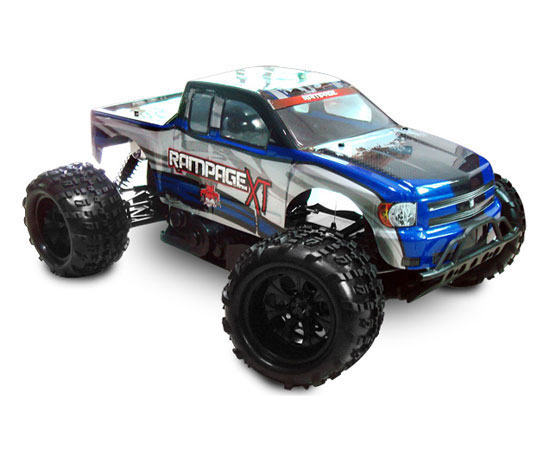 Today was a holiday in Ontario so I took advantage of the time to move forward on the RobotBrain. Seems that this project is taking up a fair bit of my time but I am enjoying it.

I did manage to get the old Rampage chassis to work with the Arduino. I was a bit frustrated that I could not get the vehicle to turn left though. I recall that earlier I realized this when I ran my first robot tests with the Arduino, so though frustrated I was not all that surprised. I ran out to the local Source (Radio Shack) and picked up a New Bright pickup truck RC car.

I have to admit that I bought it based on the cool sounds that it made and that it had lights that could be turned off and on. I would recommend that anyone reading this not make the same mistake! The problem isn’t so much a problem as it is a limitation of the RC car.

When I pulled it apart and started playing with the controller chip I realized that it did not have variable speed for the motor. It was either on or off and as a result, the car would obviously have only one speed. I am no expert in this area and I do plan to play with it to see what I can do since it seems reasonable that it should be able to support variable speeds.

When I opened the RC car I was met with a NEW BRIGHT R1036 chip and not the RX2 chip that I expected. I wasn’t sure if I should remove the whole chip as I am interested in playing with some of the additional features (it might be this that resulted in me not being able to get variable speeds).

I did find that the chips pins 21-24 were the ones that controlled the motors and soldered some wires to allow me to link to the Arduino MEGA. I re-wrote almost all the Arduino code, and added some new bits to the Android code. Most notably, I cleaned up the PING sensor code and took the Arduino/Android communication code to the next step.

I added a couple of buttons to the Android interface to allow me to test the communication of the between the two devices. I am not particularly happy with the Android code and the protocol setup, but I will take a look at that in future versions. The code does what I need and allowed me to send signals to the vehicle to turn on the motors for forward, backward, left and right.